The installation of all sorts of Bishops: Diocesan, Military, Presiding – is almost routine at the Cathedral, and it would be a chore to figure out how many Dirksen played or arranged in 49 years.

Three are especially noteworthy, however.  The first was the consecration of Clarence Edward Hopgood as the Bishop for Armed Forces on Tuesday, February 2, 1971.  The Vietnam War was in full cry, and unsurprisingly there was a public protest during the liturgy.  Members of the Episcopal Peace Fellowship processed down the nave with their symbol (in aluminum) which a thoughtful choirboy memorialized.  Then, as now, the Cathedral finds itself the center for dialogue – and protest.

The second was the Installation of John Maury Allin as Presiding Bishop in 1974.  Dirksen arranged the services across 24 hours: the Holy Eucharist at 6 p.m. Monday, June 10 (with the Cathedral in ordinary seating), then the Celebration of a New Ministry and Seating at 11 a.m. Tuesday, June 11 with the Nave chairs turned to create “choir” seating. 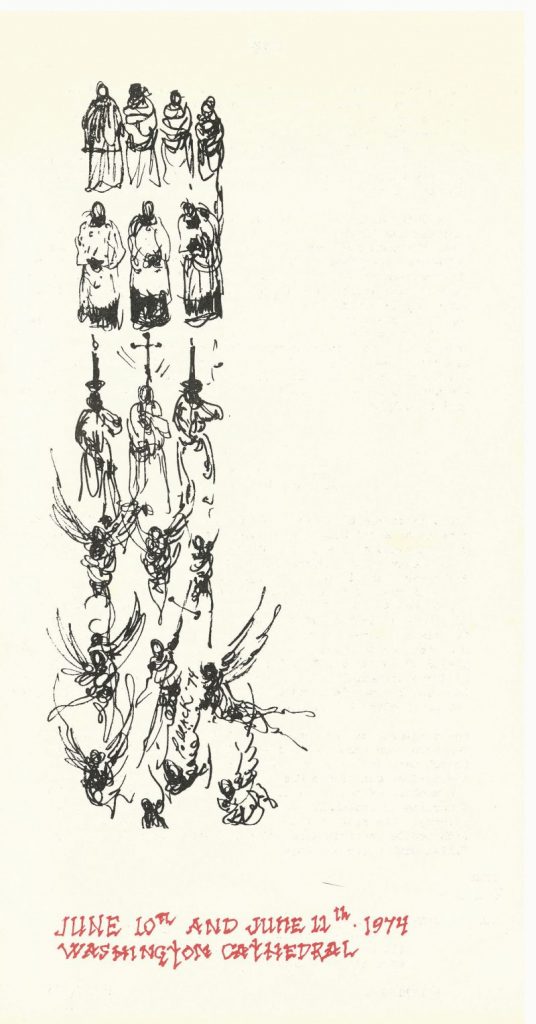 Concurrent with this event he commissioned artist Reginald Pollack to create his monumental 120′ Jacob’s Ladder hanging, from which the program décor was drawn.  The music was equally grand.  Besides the premieres of Vineyard Haven, David Koehring’s Exultant Eum, and Anthony Furnivall’s stunning arrangement of Amazing Grace the joint choirs of Grace Cathedral, San Francisco, Christ Church Cathedral, Indianapolis, and the Cathedral choir gave a torrid performance of William Walton’s Coronation Te Deum (it opens track 2 below).

A remarkable thing happened during the Te Deum. In Wayne’s words: Toward the end of this anthem the bishops entered in two single columns down the side aisles, met in the crossing, and then proceeded west to fill the 124 facing chairs, 62 on each side of the nave aisle. The last two were Bishops Creighton (DC) and Hines (the outgoing PB), who turned eastward in the crossing and went up into the choir to their stalls. Tremendous applause begins at a most appropriate place near the end of the Te Deum; it was not planned, but a spontaneous demonstration of admiration and respect for John Hines as he proceeded to his stall for the last time.

The closing hymn was Ralph Vaughn Williams’ Sine Nomine, For all the saints, to which Dirksen gave special attention.  It brought the two days’ events to a ringing conclusion.

A third remarkable service was the Installation of Edmond Lee Browning as 24th Presiding Bishop Saturday, January 11, 1986. Bishop Browing was Diocesan of Hawaii, and the service included wonderful pieces of that state’s rich Anglican tradition as well as thrilling music-making by all, especially the congregation and brass. Dirksen was directing the music himself, and it shows. 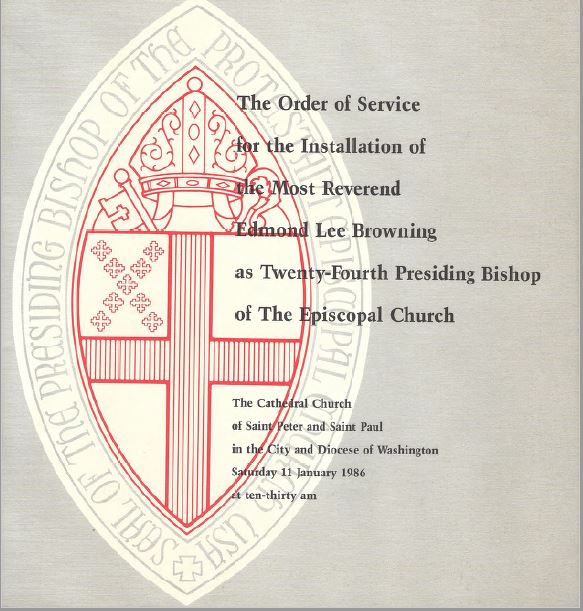