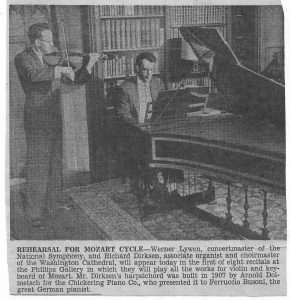 Dirksen gave few solo performances: He was entirely a collaborative musician and the more the merrier!

The full regular schedules of the Cathedral and Schools found him at the keyboard daily  through the early 60s, but he also made time for serious exploration of the chamber music repertoire: Performances of the complete Mozart works for violin and piano and the complete Haydn trios at DC’s Philips Gallery. He also recorded two discs of Beethoven flute and piano works which included a few modest Bagatelles – our only recording of him playing solo. 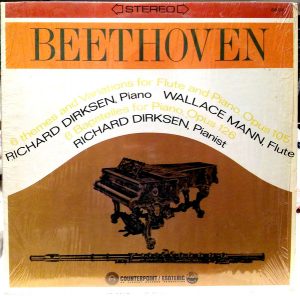 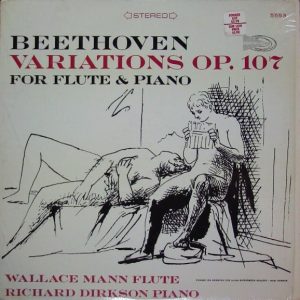 He was also available for unusual gigs, such as the night he got a call while relaxing at home in Bethesda: Supreme Court Justice Abe Fortas wanted to play his Stradivarius, right now. Wayne put on his tux and took the long drive in to Embassy Row to find a full house of dignitaries and the well-lubricated Justice who insisted on tackling the Mendelssohn D Minor Trio. Molto Allegro Agitato indeed! 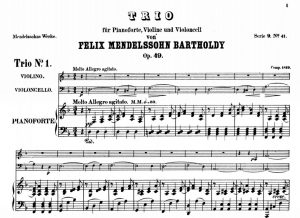 This superlative 1959 performance of Mendelssohn’s Hear my prayer has Dirksen accompanying the choir and Anthony Day, treble soloist.

He had a special relationship with Schubert’s Winterreise and was blessed to perform it first with Will Parker, and then with his own son, Rick, as a joint memorial to their wife and mother in 1997.