A brief prologue sets up the plot: The US Air Force plans to shoot Col. Adam Jones into space but this must be done from a precise location on the Fancy-B Ranch in New Mexico. The owner, Rosa Bellatrix, is not expected to cooperate so Col. Jones and Euphoria Busby are sent to masquerade as ‘dudes’ to scope out the situation. They are given a lavish New Mexico welcome in What do you say? and advised to study up on the local wildlife, such as the Cactus Cat.

The local Marshal John Remington is engaged to Penny, one of Rosa’s daughters but is beleaguered by paperwork – They went that-a-way John – and regularly out-foxed by Charlie Lodestone, a canny native American trader. Second daughter Silver pines for the ranch foreman, Lucky, who still thinks of her as a little girl – “Silly,” he says.

Adam’s attempt at riding lead to a spirited denunciation of horses in a grand waltz You can never count on a horse, but also builds the growing friendship & respect between him and Lucky. When Rosa is confronted with the government’s eminent domain claim to the Fancy-B she is convinced they intend to use it for nuclear testing, and Adam and Euphoria find themselves joining the ranch’s succession to form A brand-new country, Tularosa. Rosa is declared President by the toss of a coin, and all sing The Tularosa National Anthem to close Act I.

The new country’s supplies are provided by Smugglin’ Train (the Land of Rest hymn quote was a nod to NCS Headmistress Katherine Lee). Marshal John and Penny consider their future in When we’re married, but she gives him up. To Rosa’s dismay, Silver, Crystal and Penny make known their distaste for ex-pat living in The stuff of life.

The standoff continues until Major General Smedley and Lieutenant General Upshot arrive from DC and are apprehended as spies: Who are they? They identify Adam and Euphoria as USAF employees, and all are tossed in the old bunkhouse. Who knew Tularosa would need a jail?

Lucky is deeply distressed and sings an old Mexican folk song, Que grande viene el rio. Silver comforts him with a reprise of Buenos dias, Senor though, and when the Air Force personnel are released and the mission to the Moon explained all is accepted and embraced in the Finale. The Tularosa flag is lowered for the last time and given to Adam to take on the rocket. The mutiny is over, but Tularosa’s spirit will live forever: Cactus Cats breed fighting broods 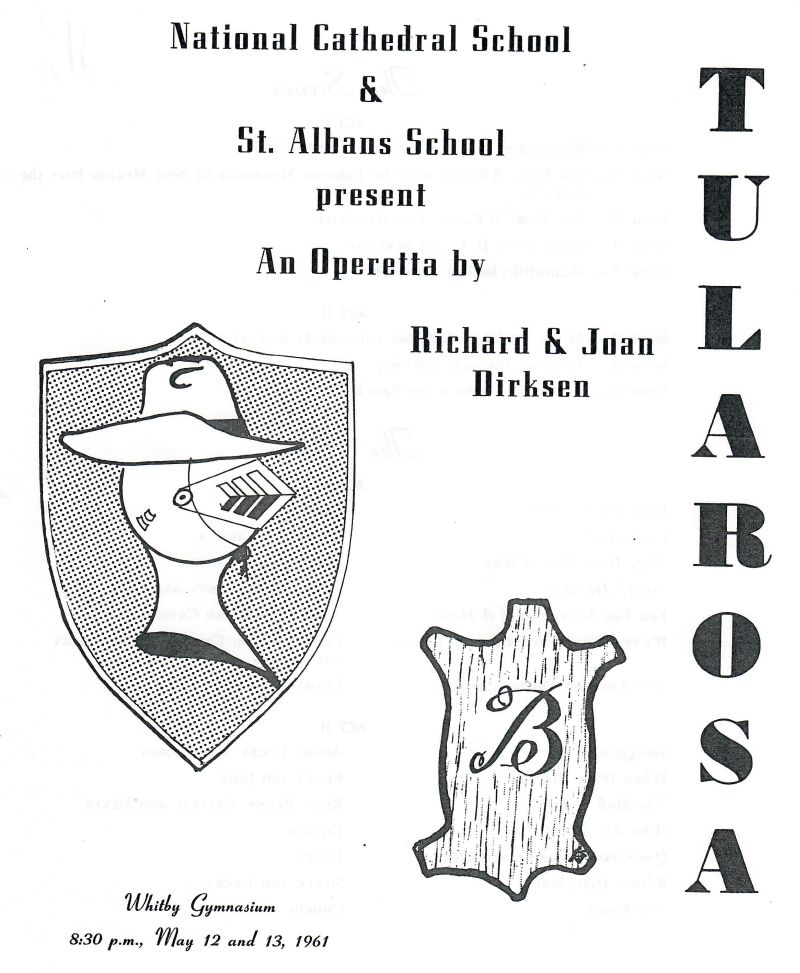