Until late in the 20th century Washington was by no means a year-round city. The pervasive summer heat and humidity drove all who could afford it away to more pleasant climes, leaving the rest to make the best of it.

One of Dirksen’s first initiatives as Director of Advance Program was the creation of Summer Festivals which ran from 1965 through the 1980s. The first five were held outdoors on the Pilgrim Steps below the South Transept. The natural amphitheater and the illumined transept façade made a striking summer destination and they grew in popularity. They were also expensive to produce, and the number of competing events was on the rise as well, so the shows moved inside. 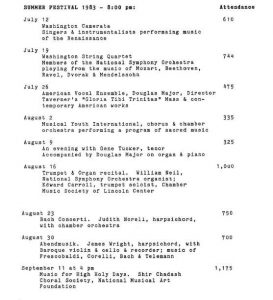 The Cathedral Flower Mart was held in May as a fundraiser for the All Hallows Guild but naturally focused on the buildings and grounds. Wayne conceived of a fall Open House with events inside and out, and opening the Gloria in Excelsis Tower for climbing tours. It was an immediate success, and (not incidentally) gave an opportunity for less-formal dedication or celebratory ceremonies. A good example is the Dedication of the Churchill Porch in 1974, for which he composed the canon The land is bright.