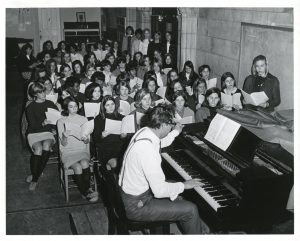 Many aspects of Wayne’s varied career as a “Cathedral Builder” are legendary. But perhaps none made more impact than his work with the children of the Cathedral Schools.

His work with the choirboys is well documented by Yang and other scholars but the best initial insight into how he felt about his students is found in his interview with The Cathedral Age in 1967.

‘Over the years they have sung with the Cathedral Choral Society such scores as the Mozart C minor Mass, the Bach B minor Mass, the “Dream of Gerontius” by Elgar… On their own they’ve sung the Stravinsky Mass, Masses of Mozart and Haydn and contemporary scores by Sowerby and me. The Verdi Requiem – can you imagine high school kids learning the Verdi Requiem so well that they could have sung it by themselves? And this kind of an experience – to stand in the middle of “the big machine” as the French use the term, an enormous oratorio with full orchestra – this is one these kids will never forget.’ 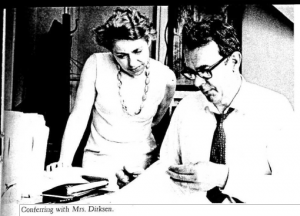 The Glee Clubs also provided him the opportunity to pursue his long-held love of the theatre. Beginning with annual Christmas pageants in the early 1950’s and continuing with standard G&S fare he went on create and stage 5 full-length operettas between 1953 and 1969, the last three with the help of his wife, Jo. His oratorio Jonah was also composed for these young people and, like most of their performances, received critical acclaim in the Evening Star.

As to how his students felt about him, its hard to imagine a greater tribute than when 50 of them, some 30 or more years after graduation, returned for his retirement in 1991, where they surprised him with an impromptu performance of songs from the operettas. Their warm enthusiasm and Wayne’s heart-felt response says it all.