Wayne’s career as a performer first blossomed in high school when he won the National Music School Competition two years straight – in bassoon. He went on to be Assistant Conductor and drum major of the Freeport High School marching band and began playing the organ for various church choirs.

His early formal studies were in organ but he felt much more at liberty with the piano. At home his favorite recreation was Beethoven sonatas and the Chopin Etudes, and the experience of “orchestrating” the accompaniments for the Cathedral Choral Society from 1946 to 1962 truly expanded his powers.

Two sets of concerts are of special note: Eight recitals of Mozart’s complete works for violin and piano in 1956, followed in 1957-58 by the complete Haydn Trios at the Philips Gallery. He also recorded the complete Beethoven works for flute and piano as well as a number of Bagatelles.

From 1970 – 1991 his performing duties were mostly in the capacity of conductor of the Cathedral Choir (1977-88) and Choral Society (1984-86) but he continued to appear on Washington stages as continuo and organ accompanist, especially with his long-time colleague Norman Scribner and the Washington Choral Arts Society. 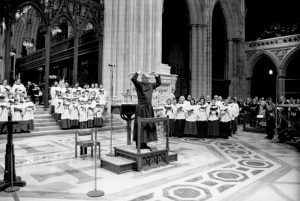 As his moving letter to the Maestro testifies playing the ‘pit’ organ for Leonard Bernstein’s Mass at the opening of the Kennedy Center in 1971 was a extraordinary experience.  And he thoroughly enjoyed his musical direction of productions at the Arena Stage and other local theaters.
His final performance at the keyboard came in 1996 at the age of 75, accompanying his son, Rick, in a private recital of the 24 songs of Schubert’s Winterreise in memory of their beloved wife and mother, Joan. This capped a musical association of forty-six years which began when Rick was a choirboy. 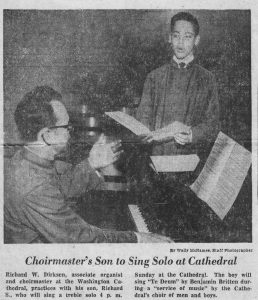