Paul Callaway was once asked about his concise rehearsal techniques. He replied, “Just listen to the piano – it’s all there.” Both he and Wayne could convey much simply from their playing – phrasing, dynamics, accents were all instantly & intuitively grasped and compelled immediate imitation from their choristers.

Paul followed the traditional English custom of playing and conducting choirs entirely from the organ console. Wayne’s role then was simply as page-tuner and occasional conductor for brass (plus playing voluntaries, of course.) But it was as Paul’s accompanist for the Cathedral Choral Society where Dirksen’s tutelage became complete. The repertoire they covered together is jaw-dropping in breadth, but also in depth: From 1946 to 1962 they did the St. Matthew Passion four times and the B minor Mass eight, plus steadily adding the traditional oratorio repertoire and presenting DC or world premieres almost every year. 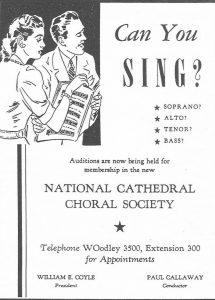 “Listen to the piano….” It’s hard to convey the myriad subtle ways an accompanist can help (or hinder) a rehearsal. They can act as a “third hand” for the conductor: supporting, cajoling, reinforcing, correcting a choir without a word being said. Having Wayne at the keyboard 42 Monday nights a year made Paul’s work possible while giving Wayne the most intimate possible training in the greatest music of the Western tradition.

From a pianistic point of view, however, the challenges of “orchestrating” the piano reductions was equally formative. The technical requirements are formidable, and Paul was never one to back away from a tempo. You can easily hear Wayne’s technique in his (almost entirely improvised) accompaniments to the Operettas: parallel thirds, octave runs, long flights of passage work – all are quietly there to make the kids sound as good as they could while amusing himself as well.  A single example: Dance me from The Flamingo Hat.