After WW II Wayne’s intention was to go to New York City and begin writing musical theater. His gift for catchy melodies and crisp rhythms stood him well in his sacred music and hymns, but they found their fullest expression in theater music.

In addition to the four Operettas he wrote with wife Jo, he produced two other substantial theatrical works. The first was incidental music for Bertolt Brecht’s Life of Galileo (in the Laughton translation.) Brecht provided witty quatrains between the scenes as well as a grand Street Ballad of the Orders, and the tense intersection of faith and science was a natural topic for the Cathedral. He wrote the score on the island of Chincoteague, Virginia, in June of 1973 and produced the show with Ted Walch’s Shakespeare & Company troupe during the Summer Festival that year, Howard Witt starring as Galileo.

This is a playlist of the music cues.

This is the entire show.

The Ballad of Dr. Faustus was entirely novel. One of Dirksen’s favorite films was the comedic Western Cat Ballou which used the framing device of a ballad sung by Nat King Cole(!) & Stubby Kaye. Transposing Christopher Marlowe’s Tragical History of the Life and Death of Doctor Faustus to the Western frontier was an instantly-convicting idea – this writer vividly remembers the night it struck – and he produced it for Festival ’76. As if he didn’t have enough to do that summer!

There are ninety-six (96) “music cues” in his catalogue from these six shows and they contain some of his very best music. A personal assortment (those are high school singers in the first four):

The hat polka – what is says on the label

The ducking stool – essential in a show about sorcery – A huge production number. 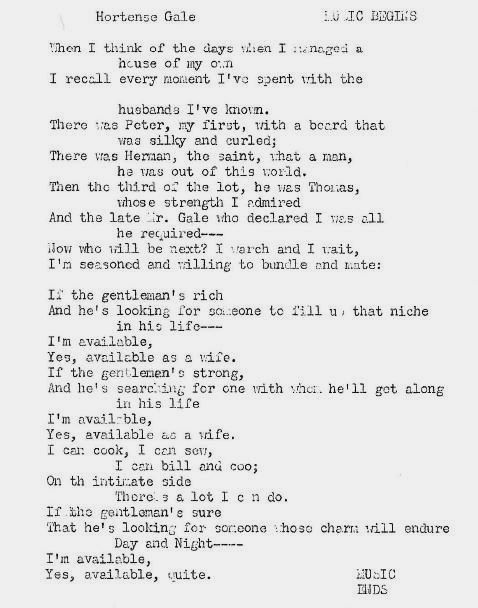 
Get it in writing – sound romantic advice.


Tularosa
Don’t ever count on a horse – a grand waltz!


Smugglin’ train – inspired by a work crew in the Cathedral’s North Crypt aisle, and a great piece of theater


Monopoly – the six wives of Henry VIII have a favorite pastime


The Ballad of the Orders – live theater at its liveliest

The Prisoner – it was an Anglican chant all along


The Ballad of Dr. Faustus
Prologue – the Ballad Singer was Gene Tucker, longtime tenor soloist for both the Cathedral and the Army Chorus