Beginning with his Army days stationed at Walter Reed Hospital in Washington in 1942, and throughout his career at the Cathedral, Wayne was fascinated by recording technology and its uses in enhancing his musical vision and outreach.

While a Chaplain’s Assistant (i.e. Chapel Organist) at Walter Reed he and a game crew of volunteers restored and ran on-base radio broadcast system that was piped to headsets at each bed. A New York Times article tells the story while providing a warm-hearted picture of Wayne at work on the air:

‘Private Wayne Dirksen, who hails from Freeport, Ill where he was choirmaster and organist, murmurs little asides in to the mike between numbers: little reassuring phrases in soldier language, cheerful bits of harmless gossip, cracks about the weather, the nurses, the Wacs, anything that comes to mind, and upstairs the wounded grin…. Pfc Dirksen keeps comparing the wounded’s requests with the “Hit Parade” and finds they just about keep pace. The overseas kids are a little while catching onto the new tunes, when they’re fresh off the hospital ships, but pretty soon they’re asking for the same numbers as civilian hep cats.’

A more serious undertaking was the first-ever recording of J. S. Bach’s complete Clavier-Űbung in 1952. This project originated with Wayne and Day Thorpe, scion of the Citgo Oil family and sometime music reviewer for the Evening Star, speculating on whether it was possible to produce a perfect recording. Harpsichordist Ralph Kirkpatrick was recruited to the effort – this was several years before his more famous recordings for Deutsche Grammaphone / Archiv – and Paul Callaway did the organ chorales in Part III.

This is Part IV of the Clavier-Űbung, the Goldberg Variations. “You have never heard a harpsichord tone like this on any recording, ever.” – M. Dirksen in an Amazon review.

Day Thorpe’s High Fidelity article linked above provides the color commentary, and the recording received attention both in the New York Times by Harold Schoenberg and the Saturday Review from Paul Henry Lang. 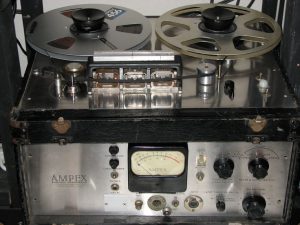 The massive Ampex recorder used for this lived in the Dirksen basement, and Wayne went on to use it for Glee Club and other Cathedral recordings. It is hard to remember and amazing to appreciate: the hundreds of inaudible splices in thousands of feet of magnetic tape were accomplished with a razor blade and splicing block.

Wayne’s own mastery of these arts can be best heard on the compilations he created for each of the operettas. Careful listening reveals that while much of the discs record live performance he cleverly inserted material recorded later and under better conditions to create a tight satisfying listening experience.