The organization of all these fell to the Worship Department. Assembling the quarterly rota of presiders, celebrants, preachers, readers and musicians was in itself a mammoth task, requiring both comprehensive attention to minuscule detail and extraordinary tact; but it was in developing, programming, and executing the extra-ordinary liturgies that his experience really shone.

The Cathedral’s main floor is 83,012 square feet. Dirksen knew how long it would take any given person or group to move from any one spot to another, on any given day or hour, to the second. One of his favorite stunts was to take the program for a major event and write the timing down the left margin before it started. He was never off by more than 30 seconds.

In his first months on staff in 1942 he sent a letter home to Freeport vividly describing the Easter Day services. We are also lucky to have programs from six Easters from 1948 – 1954. Those services and hundreds more like them were superb training for the work ahead.

The Cathedral services with the highest visibility are, of course, state funerals which have to be whipped up on short notice with complicated casts. Finding places (literal and figurative) for diverse VIPs is a major challenge; adding a Presidential visit with the attending security is exponentially more stressful.

But official Washington knew that the Cathedral could be depended on to produce superb solemnities with grace. Part of that was due to the long-term relationships Wayne and Paul built with the various ceremonial offices and organizations of the capitol: The Army and Marine Bands performed frequently at Summer Festivals and other services, and the personnel of the National Symphony and Army Choruses were regulars as well.

Another reason things went forward ‘decently and in order’ on Mt. St. Alban however was Dirksen’s abilities with people: his sensitivity to their needs, his foresight about technical necessities, his consideration of the various parties involved, and his appreciation for their efforts after all was over, often in poetic form.

The major benchmarks in the growth of the Cathedral were marked by celebrations and liturgies of increasing complexity. Starting with the Dedication of the South Transept in 1962 through the 1964 Dedication of the Gloria in Excelsis Tower and Dedication of the Nave / Festival ’76, and culminating in the ceremonies for the Completion and Consecration of the whole building in 1990 Wayne Dirksen was the chief architect, organizer and administrator of all events.

Another dedication of national importance was the Dedication of The Hymnal 1982, the Friday night before the installation of Presiding Bishop Edmond Browning in January 1986. 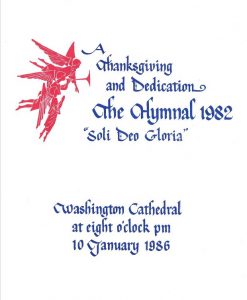 These festivities were grand and glorious. But it’s in the frequent small dedication ceremonies – of a stone, an arch, a window – that his quiet consideration was most visible.

A single example is the Wednesday, November 10, 1971 dedication of the Label Mould Termination Stone in honor of Sergei Soudekine (1886-1942). Because Soudekine worked with Stravinsky in the Ballet Russes years Dirksen arranged the Firebird theme and wrote a small “Opera in Two Acts” for the liturgy. All this for a mid-week Evensong, but an unforgettable and moving experience for the donors.

They are all in a Cathedral day’s work, and it would be difficult to figure how many Dirksen played or organized.  Three were of special note: the Consecration of the Bishop of the Armed Forces in 1971, and the Installation of the Presiding Bishops in 1974 and 1986.