Dirksen began his Cathedral years as Paul Callaway’s assistant. In this role he was in charge of the 35-member Junior Choir from whom the senior boys were chosen.

They are between the ages of six and ten, and are really fun to work with but so noisy and mischievous. Paul treats them with the same iron gloves he uses with his own choir, but I work differently. I get their confidence in me and themselves, then I set about to make them like to sing. They rehearse three times a week and sing two 4 o’clock evensong services a week — Monday and Friday.

I wish you could see me at 5 minutes to 4 on Mondays and Fridays. I stand in the vestment rooms with a line of the smaller boys in front of me tying running bows for dear life. (They are too little to do it themselves, most of them anyway.) We sing our service in Bethlehem Chapel — chant the Versicles and Responses, Psalms, Canticles and Creed and Lord’s Prayer, a high evensong, always. It is fun to make them work — and they love it.

The contrast in choir training styles between Wayne and Paul was well captured by Donald Irwin, a choirboy in the 1950’s:

Over the course of his career Wayne wrote almost two-dozen of pieces for treble voices,  for the frequent dedication or memorial services. His first published work, the Jubilate Deo was for two-part choir, and the boys were given first crack at some of his most exquisite pieces: 1975’s Father in Thy Gracious Keeping composed for the memorial of the Cathedral’s former treasurer, Ben Thoron, and the Mag & Nunc in F# minor, a commission from former choristers on the occasion of his retirement in 1991. Of special note is his only setting of the Preces and Responses written for the boys and in honor of Paul Callaway in 1977.

During the hot summer months when Callaway and the boys were away he wrote pieces just for the men of the choir (ATB): the Eleven Canons on Psalm 101 (1954) and Twelve Proverbial Canons (1955). He also composed five Latin motets for men’s voices. A set was published in 1975 as Three Songs of Prayer and Praise, but the other two Jam sol recedit (1949) and Accende Lumen Sensibus (1959) are remarkable as well. 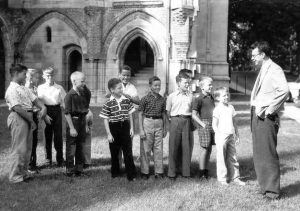 But it was Wayne’s consideration towards the boys that is most remembered today. John Shenefield, a rather shy chorister in the 1940s, was unable to hit a ball during a pickup softball game. He recalls Dirksen saying, John, just hold your bat out straight – I’ll hit it and you run like crazy!  Mr. Shenefield vividly recalls that act of kindness.  He went on to be a life-long supporter of the Cathedral and a two-time Chair of the Cathedral Chapter. These two letters also show he treated the boys with equal thoughtfulness as Precentor. 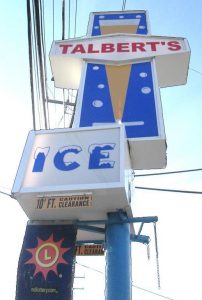 No mention of those years can pass without remarking the annual choir parties at the Dirksen’s Bethesda house. They were day-long affairs with ball games & other sports plus plenty of food & drink, and after the boys left a poker game for the men ran well into the night.

Steven Hendrick’s The Washington National Cathedral Boy Choir gives much more information on the choirs, as does the Memories / Reminiscences page.

This Evensong from June 1959 is a good representation of the choir’s sound and repertoire then. Wayne is the accompanist for the Mendelssohn and the soloist is Treble Anthony Day.