Wayne’s decision in 1938 to pursue music instead of ministry (he declined a scholarship to Hobart College) began a circuitous set of circumstances.

Aware that he was not ready to compete for the major East Coast organ scholarship at Curtis Institute with Alexander McCurdy he began an intense course of study with Hugh Price, a teacher at the Chicago Musical College. Price was an early teacher of Virgil Fox and taught out of his home in LaSalle, Illinois. Wayne took the train from Freeport to LaSalle (change in Rockford) every other week for day-long sessions: 4 hours piano, 4 hours organ: I was my own disciplinarian. The habits of hard, self-directed work then formed have never left me.

His first attempt at the Scholarship failed. The available records from Curtis don’t tell who beat him out but it may have been Richard Purvis, in which case no shame! Undaunted he returned to Illinois for another year of practice and study. 1940 was different, though. An unfortunate accident at the Freeport canning factory gave him a knee injury which ruined his second attempt at the scholarship. It might have been Barron Smith or even David Craighead who won this time, but Dr. McCurdy advocated for Wayne to attend Peabody instead. Wayne tells the story himself here.

His notebook from those years is worth closer consideration: He carefully typed out (and Virgil corrected) the principles he was being taught (see the gallery below for an example).  He also preserved souvenirs: the 1942 Cathedral music lists for Trinity and Advent, his 1943 Lenten programs at Walter Reed Chapel, and the program of the first service he led by himself at Washington Cathedral: the Dedication of the North Porch on Ascension Day, 1942, 22 years before the Dedication of the Gloria in Excelsis Tower in 1964.

The understanding at the Cathedral was that Wayne and Paul split the repertoire: what one didn’t play the other one did, to their mutual satisfaction. But though he played plenty of recitals he steered away from the organ as his principal instrument and left very few additions to the repertoire.

His anthem accompaniments, however, reveal a deep awareness of the instrument’s possibilities as well as challenging any player’s abilities. It’s obvious that he played a lot of Dupre and Vierne as well as Sowerby. Indeed, he made a rare public appearance playing Sowerby’s Arioso and Toccata at the 1976 Dedication of the Sowerby Memorial Swell division of the Great Organ. 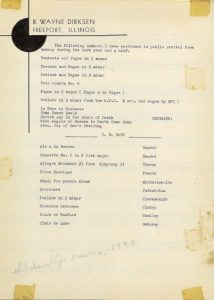 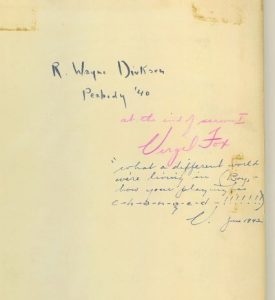 Frontispiece of his Peabody notebook. 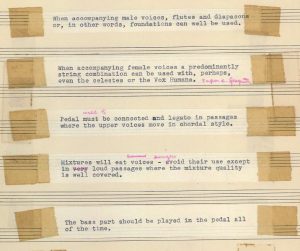 A few of Virgil's precepts. Food for thought today! 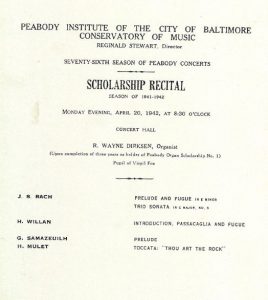 His graduation recital, repeated at the Cathedral in June 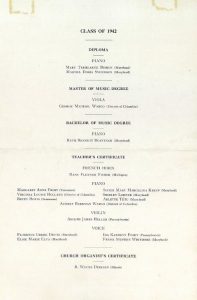 His only earned degree.