Menotti’s ‘madrigal fable’ tells of the peculiar Man in the Castle whose odd pets inspire fear, scorn, and envy. Each Beast in turn is adopted and then discarded by the fickle Townsfolk, whose March at the end sums up their philosophy:

Slow, much too slow is the judgment of God.
Quick is the thief.
Speedy architect of perfect labyrinths the sinner.
But God’s law works in time and time has one flaw:
It is unfashionably slow.

We, the few, the elect, must take things in our hands.
We must judge those who live and condemn those who love.
All passion is uncivil; all candor is suspect.
We detest all except what by fashion is blest.
And forever and ever, whether evil or good
We shall respect what seems clever.

The text is by Menotti himself and is plainly autobiographical. His tuneful operas were met coolly by metropolitan critics because they ran strongly counter to mid-20th century musical fashion.

The work was commissioned by the Elizabeth Sprague Coolidge Foundation for the 12th Festival of Chamber Music at the Library of Congress. Paul Callaway was recruited to conduct the first performances on October 19, 20 and 21, 1956, and he in turn had Wayne copy the instrumental parts. 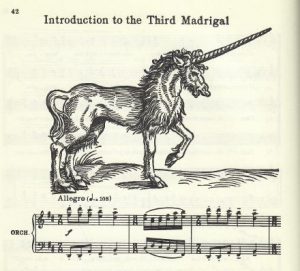 The piece made a tremendous impact on Dirksen and he subsequently mounted two productions at the Cathedral in 1967 and 1975. They were unusually but effectively presented in the North Transept, with the singers and orchestra in the balcony and the dancers on a stage below. He also composed an introduction: Three fanfares and a processional Sarabande, some of his loveliest and most haunting music.

Closer to home, though, is the text of the final Madrigal which sums up an artist’s philosophy with wry wit and not a little sadness.

Oh foolish people, who feign to feel what other men have suffered.
You, not I, are the indifferent killers of the poet’s dream.
How could I destroy the pain-wrought children of my fancy?
What would my life have been without their faithful and harmonious company?
Unicorn, Unicorn, my youthful foolish Unicorn.
Please do not hide, come close to me.
And you, my Gorgon, behind whose splendor I hid the doubts of my mid-day,
You, too, stand by. 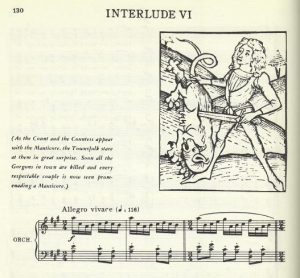 And here is my shy and lonely Manticore
Who gracefully leads me to my grave.
Farewell, farewell.
Equally well I loved you all.
Although the world may not suspect it, all remains intact within the Poet’s heart.
Farewell, Farewell.
Not even death I fear as in your arms I die.

This is the recording of the 1967 performance.


Opening fanfares and Sarabande. The trumpeter is Lloyd Geisler, long-time first chair of the National Symphony Orchestra and a Cathedral regular.