NOTE  The attached program is from the 1954 show which seems to have had a different scene order in Act I.  The synopsis here is from the later 1958 version; the recording is the 1954 cast.

Georgetown on the Potomac River, 1792. A party and dancing game is in full cry in Annabelle Layburn’s parlor – There stands a lady on a mountain – but where is Annabelle? Sister Felicia Blake doesn’t know. She doesn’t even know where Uriah, her own husband, is – He didn’t turn out very well.

The Layburn sisters (widow Hortense is the eldest) are a vivid crew. Sages, Fools and Saints have tried to figure them out, and they also inherited an extraordinary FLAMINGO HAT – Our Father’s Father often said – but wearing it brings unpredictable consequences: A lovely hat, it takes the eye.

Down the street at the Black Fox Inn the evening stagecoach is departing for Baltimore – Here he comes! – and we meet Lucius Merriner, Annabelle’s sometime beau, and his shipmates actor Anthony Shay and Captain Timothy Scarwright. It seems the Captain ‘won’ Annabelle in a card game on board and looks forward to settling down with her straightway – I’ll try my luck at love. 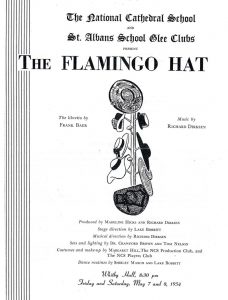 The local hat maker, the odd dwarfish Giles Monroe and his meek assistant Jane Clinton stop by to drop off some hats for other customers, but seems to know more than he says about everyone and everything, especially the FLAMINGO HAT. The gentlemen take a final glass – Madeira’s the best – and head off to bed.

The next morning finds Hortense cleaning up after the party and reflecting on her own romantic past: Four husbands, and counting (I’m available). Merriner and Scarwright enter and develop a musical introduction of the Captain to Annabelle, but It doesn’t go well: Get Out! Understandably furious with Merriner, Annabelle plots revenge…and puts on THE HAT, ending Act I.

Act II opens with Uriah Blake sound asleep at the Inn, snoring & dreaming of a “lady and something she wore…” There it is! He can’t quite remember what he dreamt, but we soon find out: Annabelle has paraded through Georgetown wearing THE HAT, and events erupt.

Plain Jane Clinton appears completely transformed into a belle and literally sweeps Anthony Shay off his feet: Dance me. Next Lucius Merriner enters, now a Puritan witch-hunter bent on exorcising Annabelle, and the shrewish Felicia Blake has become a butterfly nymph. THE HAT has turned the town on its head. Perhaps Giles Monroe can help?

He can. Captain Scarwright finds he knows all that has happened and much more. Monroe heads out leaving the Captain and Hortense Gale to discover a real mutual affection: You’re the queen. Felicia discovers Annabelle hiding in her garden but unable to take off The Hat, Polka or not. The town, led by Merriner in a righteous fury, is convinced she is a witch and threatens her with The ducking stool, but Giles Monroe steps in to summon the spirit of the Seven Sagamores and send THE HAT away for good. Released from its spell the town celebrates the several new couples including Annabelle and Lucius, together at last.