The Gloria in Excelsis Tower is a living ideal, beckoning us onward…
It reminds us of Him who said, ‘If I be lifted up I will draw all people unto me.’
RWD, narrative script for voice-overs read by Basil Rathbone 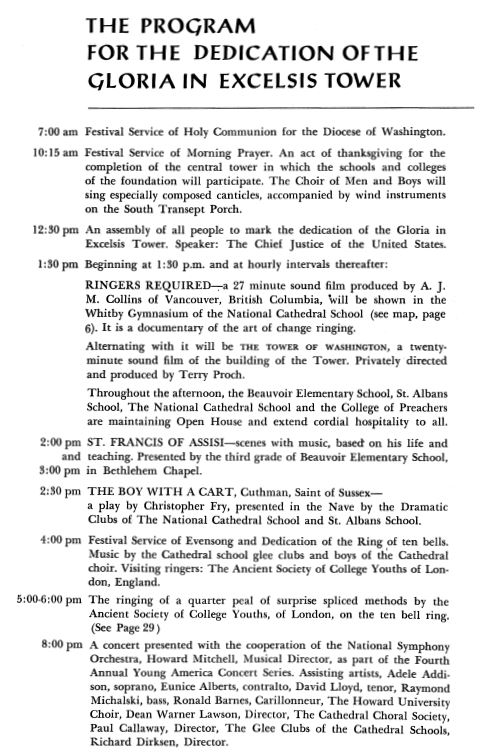 Following the success of the Dedication of the South Transept Wayne was given charge of the events, liturgies, and musical commissions for the Tower Dedication on Thursday, May 7, 1964, the Feast of the Ascension.

The amount of new music composed for the dedication of the tower is unequaled in the history of the cathedral. and since all events were outside all accompaniments were for winds and brass only.

There were hymn arrangements by Sowerby, Norman Scribner, David Koehring and Robert Grogan, and the closing concert featured an encore performance of Wayne’s Benedicite, Omnia Opera from 1962’s The Fiery Furnace.

Many of the commissioned works were recorded for a two-LP commemorative album.  The boxed set contained a full program book along with piano / vocal scores of the commissioned work.  The records themselves included dramatic narrations donated by Basil Rathbone as well as examples of the 10-bell Peal, the 53-bell Kibbey Carillon, and the Whitechapel handbells made for ringing practice.  These handbells – in D major, and only 10 bells – became important in many of Dirksen’s later compositions.

James Moore summarizes the day: ‘The whole dedication event was a celebration of American Sacred Music. This was highly appropriate as it exemplified what went on with the tower itself. Here was a building with a grand tower. The architectural style was medieval. Yet with the aid of 20th century technology it was built quickly. It was also raised, with the aid of a steel frame, even higher than originally planned, and raised over the American Capitol.

‘Thus it was a 20th century tower of a 20th century American cathedral that was nevertheless built on principles and designs inspired by its European predecessors. Likewise, the event highlighted American sacred music that was inspired by the Christian faith and composed in the mode of western art music. Yet, it was also uniquely American.’