The completion of the South Transept added significant square footage to the main floor of the building, and offered dramatic spatial possibilities for music and theater.

Dirksen grasped this immediately. The Fiery Furnace deployed the Close’s three main musical ensembles around the room: To the North, the combined Glee Clubs with three herald trumpets; in the Great Choir the complete Cathedral Choral Society, accompanied by the Great Organ and tympani and ‘a very large suspended cymbal’; and in the new South Transept balcony the Choir of Men and Boys with a chamber orchestra (flute, oboe, horn, trumpet, 2 bassoons, harp, and mixed percussion.)

The story is that of Shadrach, Meshach and Abenego, the Three Children of Israel who refuse to worship King Nebuchadnezzar’s monstrous idol and are delivered from doom in the eponymous furnace. It was inspired by the themes of the thirty-one bosses in the vault of the transept that depict the 31 verses of the canticle Benedicite, Omnia Opera (O all ye works of the Lord, bless ye the Lord) 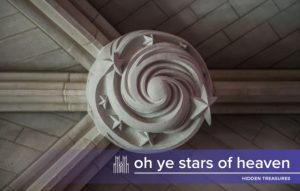 Here is Wayne’s own account of the proceedings from his Annotated Catalog:
During the Prelude, the first procession of the Cathedral Choral Society went into the Great Choir and the Glee Clubs of the cathedral schools followed down the center aisle but turned left at the crossing and proceeded up and into the North Transept Balcony. During the opening hymn the procession of honored guests and the cathedral choir and clergy entered, the choir going into its stalls in the first bay of the Great Choir. The office of Evening Prayer was sung. The sermon was given by The Very Reverend Provost H. C. N. Williams of the Cathedral of St. Michael, Coventry, England.*

After the offertory the Dedication began with a small procession to Stations for scripture and prayer which were made at the Crossing and South Porch, and then returned to the Crossing where the final Dedication prayers were said. This rubric introduced The Fiery Furnace: Then shall all be seated to hear the festival setting of the scriptures which are the themes of the keystone carvings in the Clerestory of the South Transept. 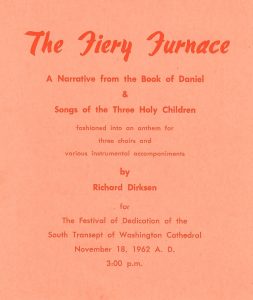 Three powerful unison trumpet calls sounded in the North Balcony and were immediately echoed by an orchestral statement in the South. The reverberation was gathered up in a powerful organ chord which fired off the two-hundred voices of the Choral Society singing “Nebuchadnezzar the King made an image of gold!” It was instantly heard that the opening of the South Transept space had made a dramatic and beautiful increase in the acoustical dimensions of the Cathedral.